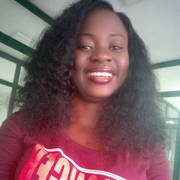 A News caster and OAP with Nigeria info FM and Cool FM stations Abuja has distinguished herself in her profession as a committed and effective communicator in the broadcasting field.

Deborah I. Ohamara Joined Nigeria info FM in 2018, after working as a Newscaster, Presenter, Reporter and Editor with the Cross River Broadcasting Corporation CRBC Calabar (As a contract staff after her National Diploma from the Akwa Ibom State Polytechnic Ikot-osurua Ikot Ekpene)for about 9 years and moving to NTA Calabar a few years later.

NYSC in NTA Headquarters Garki Abuja.
Asides news casting, she is an Anchor on the Midday Dialogue Sunday Special, a magazine program that features celebrity interviews on the spotlight, talk on topical and trending issues and human interest issues in general.

Deborah Ohamara was born in  Kano state Nigeria to an Igbo father and Boki mother. She was formally known to some as Deborah Ndifon or Deborah Kidzu.
Raised partly in Kano and Anambra states of Nigeria, and known to be one of the best amongst class mates and peers.

Deborah Ohamara pursued a Bsc in Mass Comunication in the Cross River State University of Science and Technology (CRUTECH) Calabar, where she graduated with a Second Class Upper division.

She is blessed with the ability to speak about four Nigerian languages namely, Igbo, Boki, Hausa and Efik, which can be attributed to the aforementioned details.

Also a voice over artiste and translator in Igbo and English languages she is multi-talented with fashion designing skills, and recently began to pursue a career in Music.

She was married and blessed with three lovely daughters.

Presently she strives to fulfill her deepest desire of healing the world, helping and giving a listening ear to the best of her ability to as many as come her way.