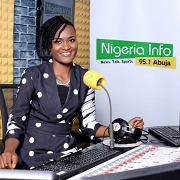 A broadcaster on both radio and TV with over 5 years on-the-job-experience is a curios, enthusiastic and determined On Air Personality (OAP) who's penchant for positive change in her society is the force that drives her to excellence in the industry.

As a professional Television Producer trained at the renowned NTA Television College Jos, Plateau State, an affiliate of the Ahmadu Bello University, Zaria, Kaduna State, she has garnered requisite skillsets for the Media space.

Between the year 2013-2018, she anchored a number of Television programmes which include the 'Tin City Rendezvous Show' for NTA Jos Network Centre, 'The Bright Morning Show' and a tourism programme titled 'Even in Nigeria' both of which were hosted by the Nigeria Central Television (NCTV), before making a transition to Radio broadcasting.

Dorkong has within the same period been a host of Urban Radio anchoring 'The Road Show' at Cool FM Abuja.

She currently hosts 'The Mid-day Dialogue Show' which is featured every weekday and the 'Let's talk Show' on Saturday Nights both of which are broadcasted live on the 95.1 Nigeria Info FM Abuja.

She has conducted several live Shows and Red carpet interviews at the famous Zuma Film Festival, Queen of Plateau and other social and corporate events.

She was also awarded Best Presenter of the 2014 Graduating class of the NTA Television College Jos.

Her most popular social activities include swimming, watching movies, cycling and networking.