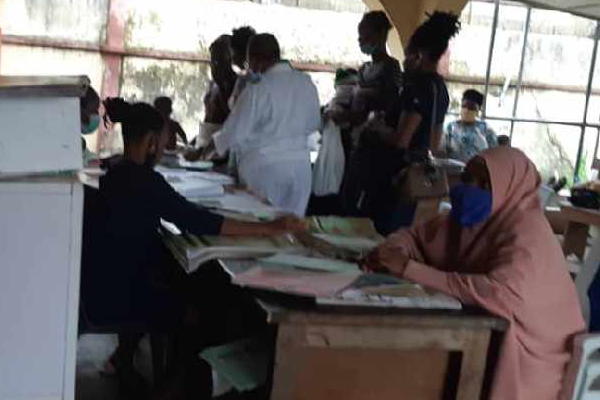 According to Water Aid, 3 out of every 10 Nigerians lack clean water. Yet one of the ways to keep safe from Corona Virus is to wash hands frequently and thoroughly with running water.

Although the state is surrounded by water, many public facilities in Lagos lack clean running water.  It is however worrisome that health facilities also experience a dearth, even during this pandemic.

I visited the Ashogbon Primary Health Care centre on a routine immunization day. Located at Odo Eran, Bariga, the compound looked nothing like a health facility in or out. There's a gateman who tells you the place is open.

A bigger problem lay inside. There's no running water at the Ashogbon health centre. The tap bucket hoisted on a stool might have been empty but for the rain which fell overnight.

Interestingly, the health workers declined speaking in details to the press about the situation of the deteriorating facility. I gathered, though that the PHC buys water from cart pushers to meet their demands as the borehole machine has been bad for a long time.

The CMS  health centre located at Ilaje, Bariga is currently shut down. The security man who is the sole soul around, tells me from behind the locked gates that this is because fumigation was carried out at the center. He said "something happened here a while ago and everyone was asked to go home. Even mothers who just delivered were discharged ".

At Ashogbon PHC, giving a prep talk before the start of the immunisation, a nurse mentioned the possibility of a Corona virus case at the shut CMS health Centre, Ilaje and emphasized the need for spacing while sitting, and compulsory face masks to avoid continued spread of the virus.

A nurse washes her hand with water from the bucket

The Chief Press Secretary to the Chairman Bariga Local Development Council, Mr Tunde Akere confirmed that there was a CoVID19 case at the CMS Center. According him, the facility was shut "because a doctor tested positive to COVID-19 so all the nurses are under quarantine. But it will be open in two weeks time".

This means there will be a surge in the population of patients going to Ashogbon primary Health Centre, Odo Eran which  is the next health facility around.

Inside the healthcare centre

On the water situation,  Akere said the problem is due to the proximity of the Lagoon to the health centre. When asked if an alternative was provided, he claims a tanker supplies water to the facility but at intervals he could not confirm. He also mentioned that the PMC was expected to buy water with some of the money the council gives it for maintenance.

He agrees though that the funding is too small as, according to him, the council 's allocation is reducing and funds have not been coming in.

The absence of running water in a health facility poses a great risk to visitors and patients, especially during the continued Corona Virus pandemic. While Tunde Akere confirms a planned reconstruction of Ashogbon PHC by the Council government, the water situation of this standing PHC is an emergency. And the solution is simple: fix the faulty pumping machine and provide alternative power supply to pump water.

**
This is first in a series titled "WHERE'S THE WATER", highlighting the impact of water scarcity on citizens during #COVID19