Who will pay the teachers of these private school students?

The news making the rounds that the Federal Government will pay salaries of teachers in private schools may just about be fake news.

You must have seen a message online - via Whatsapp, Facebook, tweets or on other social media platforms, raising hopes of Nigerians that the FG would pay the salaries of private school teachers as a form of palliative to cushion the adverse effects of COVID-19.  This exciting news is credited to Yomi Otubela, the President of the National Association of Proprietors of Private Schools (NAPPS).

Since the government announced the closure of schools in March this year, due to rising number of coronavirus infections, some private schools have been unable to pay teachers’ salaries. The reason for this is not far-fetched: schools run on school fees. Since schools are shut and students safely tucked at home, no revenue is generated. Many private school teachers got their last salaries in March and it was half payment. While teachers in the employ of the state and federal government continue to get their salaries, private school teachers have continuously lamented the untold hardships they face.

So, you understand how exciting the news of salary payment from is.

"The biggest challenge with COVID is not the disease itself but the economic and social impact that it will leave us with" @UNDPNigeria Resident Representative; @yahyamalindi, tells @Femicoolfm and @WiebeB_Africa on #Covid19heros pic.twitter.com/jToXjw6hQg

Fact checking this news, Nigeria Info spoke with the Deputy Director, Press and Public Relations of the Federal Ministry of Education, Mr Ben Goong, who declared the news that the FG would pay the salaries of private school teachers as palliative during the lockdown period, fake.

In an interview with Nigeria Info, Goong stated that no one, not even NAPPS, knows the precise wage bill of private school teachers in Nigeria.

According to him, “the sheer number of private schools in the country will tell you that it is unrealistic. It would take about half of the nation’s budget to pay these salaries. In fact, nobody can tell you precisely the wage bill of teachers in private schools across Nigeria. It is fake news”.

However, explaining the demands of NAPPS to the FG, Yomi Otubela said “NAPPS, at the beginning of the lockdown, had written to the Nigeria Economic Sustainability Committee, headed by the Vice President, Yemi Osinbajo, requesting that the FG takes over payment of salaries of teachers in private schools for the period of the lockdown. We also asked for non-interest loans or single digit interest with a 10 year repayment plan.” He stated that he is confident that the FG is already working on this. 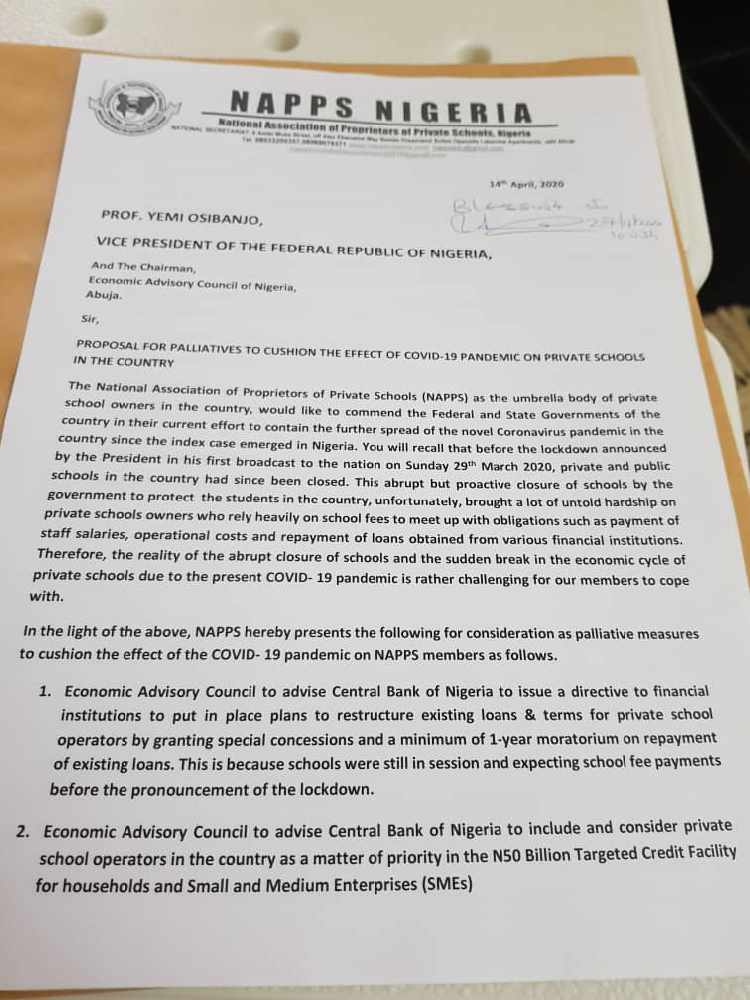 The Minister of State for Education, Emeka Nwajiuba, at the Presidential Task Force on Covid-19 refuted claims that the FG would pay salaries of teachers in private schools. According to Nwajiuba, “the CBN window is available for them to exploit and really any assistance we can give to them we will like to give them, but it is important to clarify that we are not taking over the payment of their salaries”.

So, was Yomi Otubela misquoted? He insists that he wasn’t.