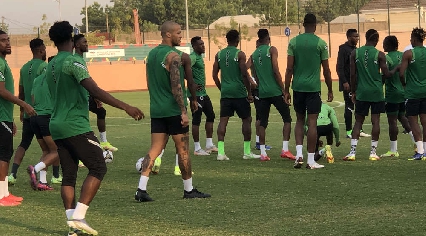 ​​​​​​​One of the more high profile first-round clashes in this year's AFCON took place between 7-time champions Egypt and 3-time winners Nigeria.

An exciting clash with a lot of star quality on display and the football was sure not to disappoint. Coming into the tournament, both teams and their managers were under pressure; with Nigeria going as far as sacking Gernot Rohr a few months before the tournament. This game delivered one of the most exciting matches of the first round; in this analysis, we take a look at how Nigeria outclassed Egypt on the day.

Nigeria lined up in a 4-2-3-1/4-4-2 system under new coach Augustine Eguavoen, sticking to the early template of Gernot Rohr at the start of his coaching reign. Maduke Okoye in goal; Ola Aina, Troost Ekong, Omeruo and Sanusi made up the back four, Joe Aribo and Ndidi formed the base pivot in midfield, Moses Simon and Samuel Chukwueze flanked Kelechi Iheanacho and Taiwo Awoniyi up top. 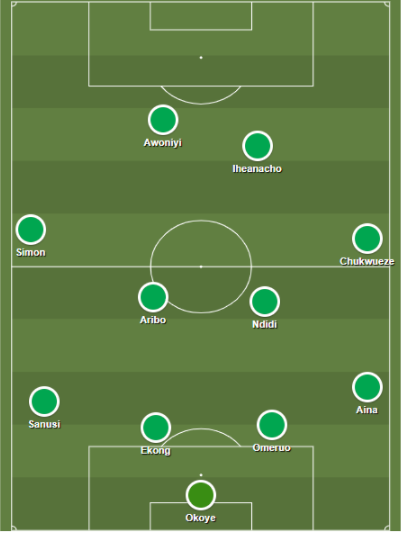 Egypt used a 4-3-3 but shifted tactics as we will find out during this analysis; Ahmed Hegazy and Hamdy anchored the back four with Tawfik and Fattoh; Elneny, Hamdi Fathi and Trezeguet lined up in midfield with Mohammed Salah spearheading a three-man attack with Mohamed Marmoush and Mostafa Mohammed. 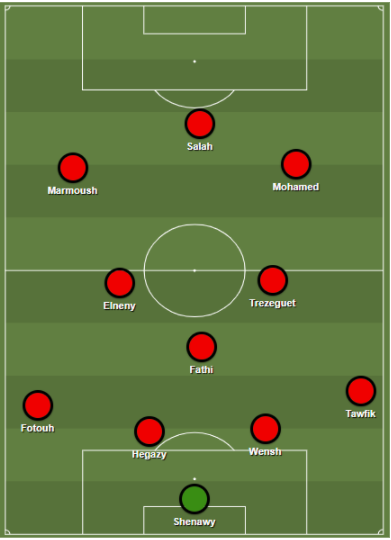 Akram Tawfik went down with an injury within the first 10 minutes in the game; unfortunately, the incident happened when he tried to defend Moses Simon out wide. Nigeria came out full throttle suffocating Egypt in the first few minutes of the game, Tawfik's injury was unfortunate but it allowed coach Carlos Quieroz to shift the system to more of a 3-4-3 presumably to counter the threat Nigeria posed out wide in the first few minutes.

However, Nigeria's system and rotations made it difficult offensively and defensively for Egypt after they switched to a 3-4-3; within the first 35 minutes, Egypt barely completed any passes or progressions into Nigeria's box - this graphic from The Analyst highlights how neutered Egypt's attack was. 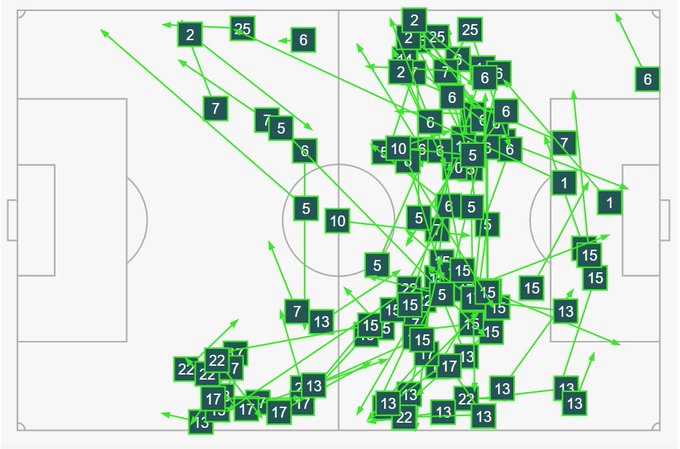 So how did Nigeria dominate Egypt in the first 45 minutes? They kept the ball. Nigeria attacked and sustained attacks in Egypt’s half, and anytime they lost the ball they successfully counter-pressed to win it back. Even when Egypt were able to gain some sort of possession during transitions, Nigeria's rest defence was on hand to deal with the threat of Mohammed Salah - who had little to no influence on the game in the first half, as seen with his touch map below via The Analyst. 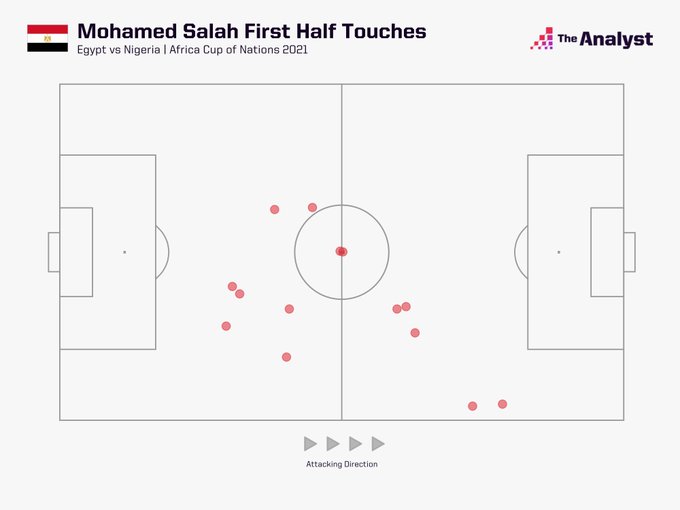 What Nigeria did well was to not press Egypt high up the pitch, rather, they waited to engage anytime Egypt tried to progress the ball through midfield - Iheanacho and Awoniyi did an incredible job of screening and denying access to Elneny and Fathi. The Nigerian winger on the side of the ball would close down the Egypt fullback while the front two shifted across to force the passes wide. 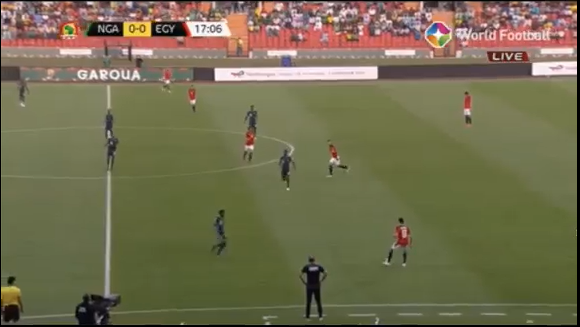 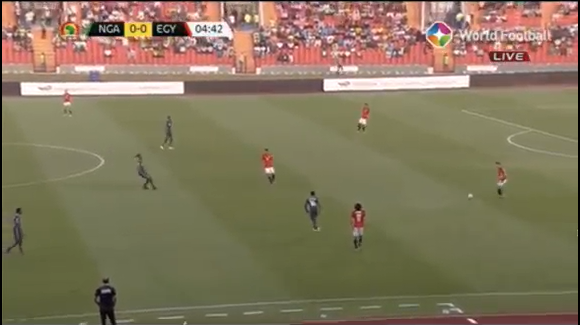 This frustrated the Pharaohs on the ball and forced them into playing the wrong passes in desperation; they frequently hit balls down the channel for Mohammed Salah to run unto but unfortunately the forward was always outnumbered near the opposition area.

The video below highlights a 2-minute spell where Nigeria prevented Egypt from getting anywhere near their box with their movement and defensive structure:

The combination of Nigeria blocking access into dangerous areas in central areas and forcing turnovers out wide made Egypt almost non-existent in the first half of the game.

Though the main set-up was 4-4-2, Nigeria had very effective rotations with the aim being to release Chukwueze and Simon as soon as possible; with Ndidi being the trigger anytime he received the ball. In the build-up, Nigeria's fullbacks had key roles - Ola Aina often initiated attacks by inverting and driving the ball into midfield areas, while Sanusi stayed out wide which forced Egypt's win back down that flank to mark both Sanusi and Moses Simon.

The duo combined to complete 5 dribbles, with Chukwueze creating 4 chances in the game according to Opta statistics. They ran Egypt ragged all game.

The attacking structure of the Super Eagles was very impressive, morphing into a 3-2-5 and occupying all the possible spaces giving the Egyptians headaches. Omeruo, Ekong and Sanusi would form a 3-man shape, Aina would move alongside Ndid in midfield when Nigeria moved the ball. Simon and Chukwueze were as wide as possible to drag defenders out of shape while Iheanacho and Aribo operated between the lines to feed off Awoniyi's flicks and headers.

This is how Nigeria's shape matched up to Egypt in the game: 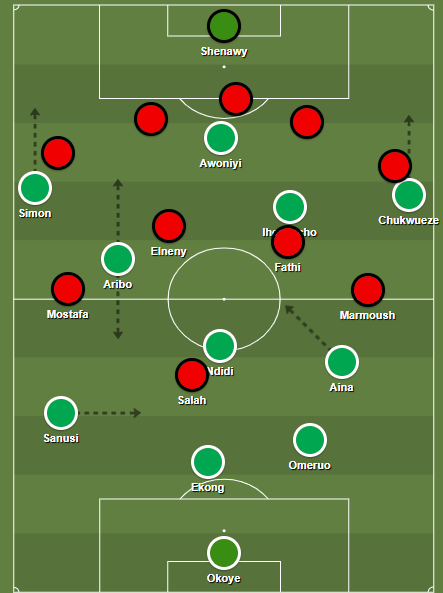 Aina was the key part of Nigeria's game, offering himself in midfield areas with every opportunity and causing Egypt problems by underlapping and overlapping - keeping the wingback guessing. Defensively he was cleaning up down the right-hand side stifling Egypt's midfielders anytime they beat the counter-press.

Nigeria vs Egypt was a thoroughly entertaining game from a tactical point of view; Eguavoen seems to have his style of play showing in his early days in charge. The pressure is now on Egypt and Carlos Quieroz, who was subject to abuse from fans after the game, to fix Egypt’s deficiencies in attack before their next game.

Nigeria's counter-press will serve them well in this tournament, as many sides have shown their willingness to sit deep and counterattack. This means they have a way to thwart the smaller sides who may attempt that in games. 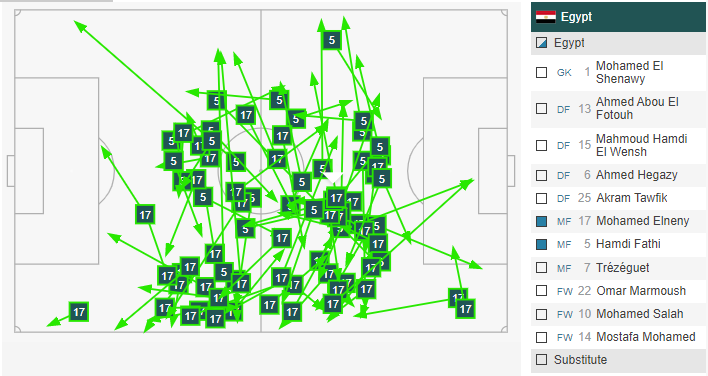 Egypt's attacking is a major issue, the team has no players in midfield to penetrate opposition defences - neither of Egypt’s pivot was able to complete a pass into Nigeria's penalty area. This essentially means that the attack had little to no service at all, Carlos Queiroz has a big task on his hands if Egypt stand a chance at winning the trophy