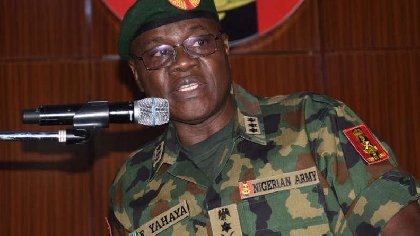 A Federal High Court sitting in Minna, the Niger State Capital, has ordered the arrest of the Chief of Army Staff, General Farouk Yahaya, for contempt.

Also, the judge issued that the Commandant Training and Doctrine Command, Minna, Major General Olugbenga Olabanji, be arrested and imprisoned for a similar offense.

According to her, the two suspects are to remain in custody until they purge themselves of contempt.

Recall that earlier this week, a federal high court in Abuja sentenced Usman Baba, the inspector-general of police, to three months in prison for disobeying a court order.

Similarly, in November, an FCT high court ordered the remand of Abdulrasheed Bawa, chairman of the Economic and Financial Crimes Commission (EFCC), for contempt.