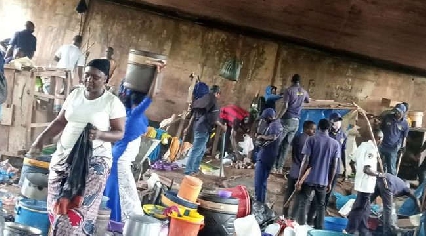 The drug peddlers ran as soon as they sighted the taskforce team which  chased them on the streets of Wuse before arresting them.

The Senior Special Assistant on Monitoring, Inspection and Enforcement to the FCT Minister,  Ikharo Attah, said the suspects were caught with Cannabis Sativa and other illicit drugs.

"We saw the bridge heavily smoked due to the activities of food vendors,  welding work going on, people are living under the bridge, we arrested five guys with indian hemp here;  carpentry business, charcoal business all under the bridge," he said.

He said the suspects will be taken for investigation.

The Head of Monitoring and Enforcement at the Abuja Environmental Protection Board (AEPB), Kaka Bello, lamented the environmental degradation taking place under the flyovers in the city centre.

He said public properties are being destroyed by a few people.

"We are here to stop all illegal activities under the bridges.

"And we have arrested some people and they will be charged to court.

"Apart from degradation, destruction of public properties, we also have issues of insecurity.  A lot of miscreants living under the bridge."