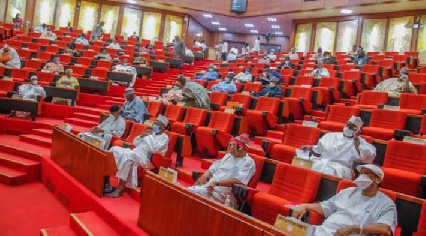 Senate on Tuesday had a disagreement with the Securities and Exchange Commission (SEC), over spending of revenues generated by SEC  largely on salaries and emoluments of staff of the commission.

The Senate Committee on Capital Market feels it is wrong for SEC to expend close to 90% of revenues made in the 2021 fiscal year on staff salaries and emoluments.

But SEC on the other hand denies being frivolous on spending.

The disagreement ensued from presentations made by Director General of SEC, Yuguda Lamido when he appeared before the Senate committee to defend the 2021 budget performance and projections for 2022.

Yuguda in his presentation said: "A total of N11.5billion was projected as revenue for 2021 out of which N2.689billion was realised as at June with the hope of making more before the year runs out.

"Total recurrent expenditure for 2021 was budgeted at N13.53 billion but the actual expenditure was N4.063 by the end of June.

"Our budgeted deficit was N5.173 billion but the actual deficit as at end of September was N2.834 due to funding of it from our reserve.

"Though revenue performance is still weak but series of innovations like newly introduced charges for secondary Investors, will boost it up from 2022 fiscal year and beyond.

" In giving room for more financial inflow , we are planning to retire about 152 top management staff with fat salaries in paving way for recruitment of fresh workers with attendant less financial burdensome on the commission .

"There are measures at reducing expenditure and also measures at increasing revenue of the commission," he said

But the Chairman of the Committee, Senator Ibikunle Amosun, frowned at the expenses made by the commission from its generated revenues