Nigeria’s Next President Should Emerge From The South - Southern Governors 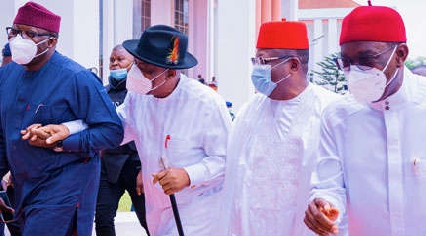 ...the next president of Nigeria should emerge from the Southern Region.

Nigeria’s next President should emerge from the southern region.

This was part of the decisions reached by Governors of the Southern Governors’ Forum on Monday in Lagos.

Chairman of the Southern Governors’ Forum, Rotimi Akeredolu made this known while speaking to journalists after a closed-door meeting of the governors in Alausa, Lagos State.

The Forum also expressed their disapproval with the proposed three percent for host communities in the petroleum industry bill.

The governors also set September 21, 2021, as the deadline for the promulgation of anti-open grazing law among its member states.