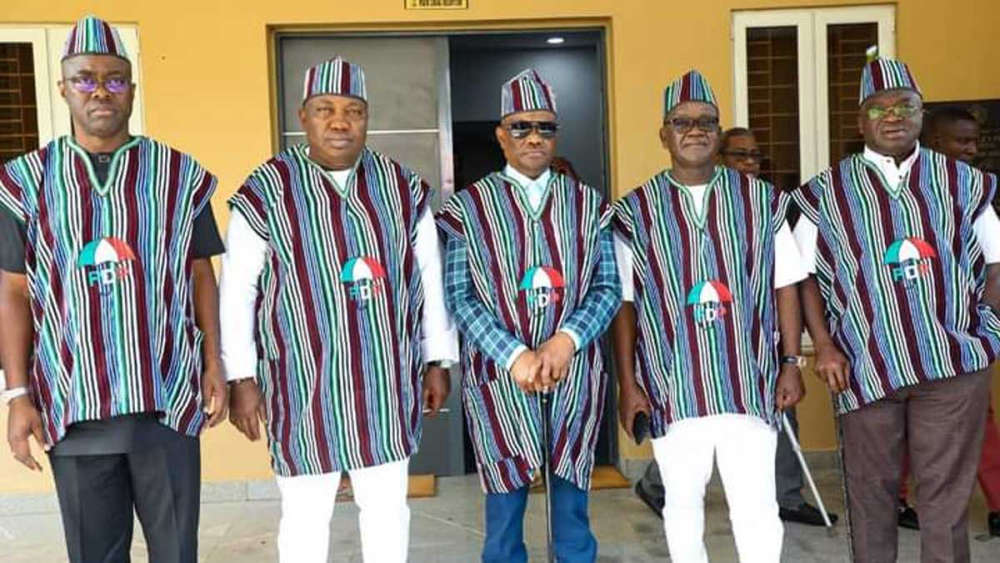 The five aggrieved governors of the People’s Democratic Party are insisting on the removal of the party’s chairman, Iyorchia Ayu.

They doubled down on their demand after meeting in Lagos on Sunday.

The governors – Nyesom Wike of Rivers State, Seyi Makinde of Oyo State, Samuel Ortom of Benue State, Ifeanyi Ugwuanyi of Enugu State, and Okezie Ikpeazu of Abia State – were joined at the meeting by other members of the party, including former governors Ayo Fayose, Donald Duke, and Olusegun Mimiko.

Before the closed-door meeting, Governor Makinde described the team as the Integrity Group, possibly coined to accommodate its enlarging membership.

“We are here this morning to hold a meeting of the Integrity Group within our party, the PDP,” he said.

“We have been of the G5 – that is, the five PDP governors. The G5 is all about the Integrity Group.

“You can see us, five serving governors, as the face of this struggle, both the leaders and elders of the party that you see here are the people behind those faces.

“We are in the South-West to review the situation within our party, to review where we are, and to also look at what is going to happen in the coming elections.’’

After the meeting, Mr. Jang restated the group’s opposition to Ayu’s chairmanship but also said they were open to reconciliation.

“After a careful review of developments in our party, we have decided to stand on the decisions we took in our Port Harcourt meeting,” he said.

“And we hereby reiterate that the window for reconciliation in our great party, PDP, remains open.”

The aggrieved PDP members have been in a running battle with the party’s presidential candidate, Abubakar Atiku over his protection of Ayu.

They want Ayu to resign and allow a southern Nigerian to take his position since the presidential candidate, Atiku is a northerner.

The group had hinted at supporting a presidential candidate of another party in the 2023 elections if Ayu and Atiku do not budge.