By Additional Reporting from NAN 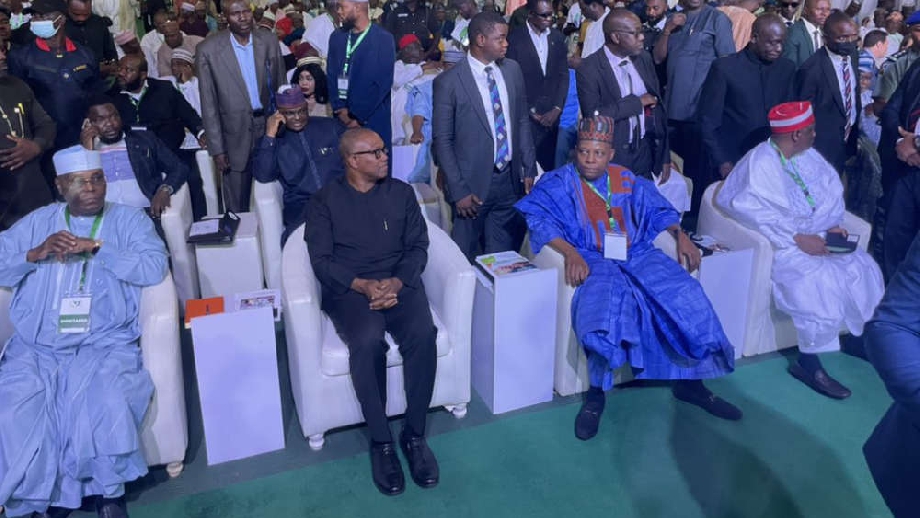 The leadership of the 18 registered political parties and their presidential candidates signed the first peace accord on Thursday in Abuja to commit themselves to a peaceful electioneering campaign.

Bola Tinubu of the ruling All Progressives Congress (APC) was absent with no reason given by his campaign for his non-attendance.

He was represented by his running mate, Kashim Shettima who sat in the front row alongside Obi and Atiku.

The seating arrangement upset the presidential candidate of the African Action Congress (AAC), Omoyele Sowore, who confronted him.

Sowore also confronted the candidate of the Action Alliance (AA), Hamza Al-Mustapha over his role as the Chief Security Officer of the late former Head of State, Sani Abacha.

At the Presidential “Peace Accord” signing in Abuja, I had to challenge Al-Mustapha Abacha henchman and Kashim Shettima who took the position of Presidential candidates because ⁦@officialABAT⁩ was no where to be found but organisers let him sit in front! pic.twitter.com/kNv4mzUG9S

The chairman of the National Peace Accord, retired Gen. Abdulsalami Abubakar, said the signing of the peace accord which started in 2015 was still relevant for the 2023 elections.

He noted that fake news and misinformation posed a threat to the vote.

“Now that the 2023 general elections are around the corner, issues of major concern that have the potential to negatively impact the integrity are better imagined.

“One of such issues is the spreading of fake news,” he said.

“Fake news and misinformation continue to pose a significant threat to the 2023 general elections. I am told already that fake news has also declared the winner of the 2023 election even before the exercise.

“It has shifted focus away from issue-based campaigns and created the platform for political parties to resort to name calling, personal insults, and character assassination.”

In his remarks, the chairman of the Inter-party Advisory Committee (IPAC), Yabaji Sani said all political parties were committed to a peaceful, credible, and reliable election.