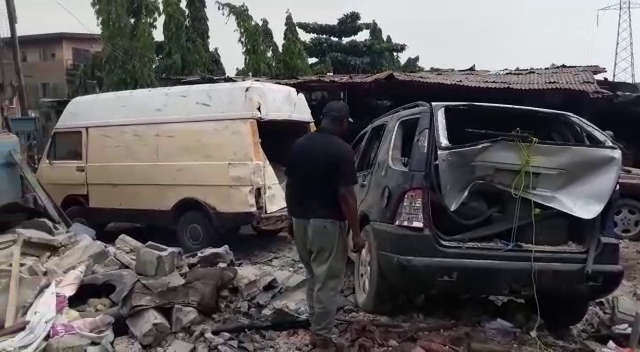 Shop owners at the complex where a gas explosion occurred on Tuesday at Ojekunle Street, Ladipo Spare Parts Market, Mushin, Lagos have been asked to vacate.

This directive is contained in a letter signed by the Permanent Secretary, Ministry of Transportation.

The notice was posted in three different places at the scene of the incident.

The Ministry of Transportation in the latter said the vacation notice is because the area was originally allocated to be used as a mechanic workshop.

“I am directed to express the disappointment of the ministry on the conversion of your allocated workshop to erection of shops, this negate the essence of the mechanic village scheme.

“Consequently I am directed to inform you to revert to the original design of the workshop within three days as non-compliance would lead to revocation of your allocated approval,” the statement said. 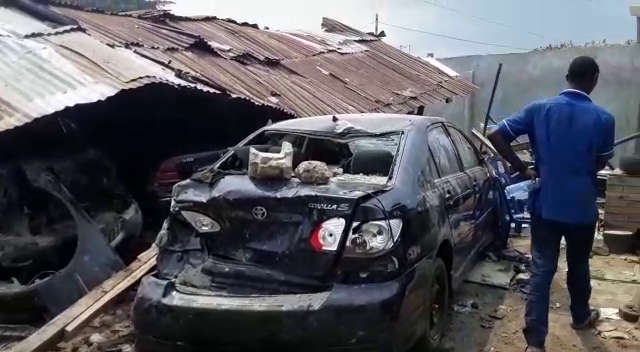 A vehicle tire seller, Obinna Okechukwu said “We need financial help; we are moving out of here now, and most of us don’t have capital to rent another shop. The shop they just told me is available to lease is three million naira.

“We have lost millions here, close to eleven or ten million, we need government help.”

Another shop owner identified as Alahji explained his case this way:

“I lose a lot of market here, government say they don’t want us here again and this is the place me I am repairing steam machine and my wife is selling mineral (drinks). Please we need government help.”

Our correspondent reports that a number of people whose vehicles were damaged in the blast yesterday were seen evacuating the wreckage.

Sights from the scene of the gas explosion that occured on tuesday at Ladipo market, Mushin.

5 persons died from the incident, including a 10 year old boy.

When i visited yesterday, limbs and body parts of deceased persons were noticed among the rubbles.

Such a sad way to die pic.twitter.com/qr04fL42wa

Meanwhile, there are fears that at least 12 shops located around the site of the explosion on Ojekunle Street could be demolished.

Our correspondent tells us that security operatives have cordoned off the affected area and the shop owners prevented from gaining access to their shops.

A shop owner who choose not to be named said: “We came here today and saw the tape on our gate, government say we should leave that they want to demolish the place.”

But the Director-General of the Lagos State Emergency Management Agency Femi Oke-Osanyintolu says there is no such plan for now.

He said that a committee has been constituted to investigate the explosion and the report of the committee will determine if demolition is necessary.

“All the shops that were affected were cordoned off, the area was cordoned off and we constituted a committee to look at it (cause of explosion) holistically.

“The committee will first of all, give us report before we can know what to do next. We cannot just go and do demolition.

“We will carry out an integrity test and make sure the place is safe for everyone.” 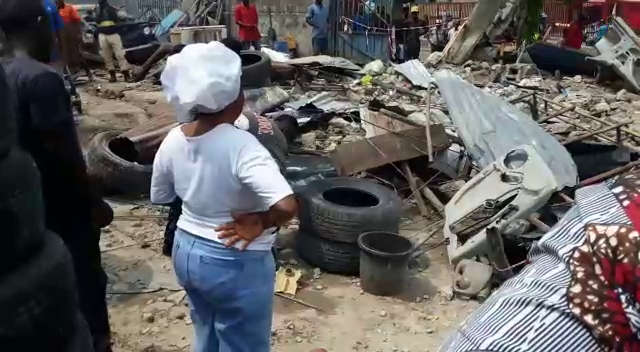 More body parts of victims of the gas explosion were recovered today as shop owners moved their goods from the affected area.

Our correspondent who visited the scene of the explosion reports that sympathizers were devastated when they found the remains among vehicle parts.

It took the intervention of security operatives on ground to restore order as onlookers rushed to catch a glimpse of the remains.

Meanwhile, the Senate has ordered an investigation into the remote and immediate causes of the gas explosion at Ladipo Spare Parts Market.

The Upper Chamber reached the resolution on Wednesday after a debate on a motion sponsored by Senator Solomon Adeola.

In his presentation, the Lagos West Senator also called the attention of the Senate to yet another explosion in his senatorial district resulting in fatalities.

He stressed that residents in all the densely populated areas now live in fear of not only losing properties and investment but their lives or those of loved ones from these frequent explosive fire disasters.

The Ladipo gas explosion led to the death of at least five persons including a 10 year old boy.