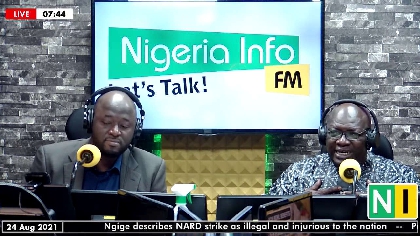 Public affairs analyst, Jimi Disu, has called on the Nigerian Association Of Resident Doctors (NARD), Lagos Chapter, to put an end to their strike action due to the agreement reached with the state government.

He said this on Morning Crossfire with Sheriff Quadry while reacting to news that the state chapter of the body has refused to return to work despite an agreement with the state government.

Recall that NARD commenced its strike on the 2nd of August 2021 after a failed Memorandum of Action with the Federal Government.

Subsequently, The Lagos State government met with the doctors in the state after which it revealed that Governor Babajide Sanwo-Olu had met some of the requests of the issues which to the industrial action.

However, the President, Association of Resident Doctors at the Lagos State University Teaching Hospital, Ikeja, Dr Azeez Ojekunle, reacting, said despite the agreement, the national body of the association declared the strike and it alone has the right to call it off.

But, Disu believes this is wrong as there should be exceptions for States willing to meet the demands of the doctors. Watch his argument below>>>>