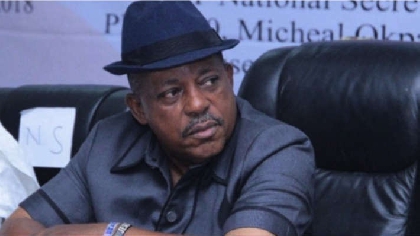 Embattled National Chairman of the Peoples Democratic Party (PDP), Prince Uche Secondus is shocked at the decision of a court in Port Harcourt which affirmed his suspension in his ward.

Over the weekend, a high court sitting in Port Harcourt affirmed the suspension of the embattled PDP National Chairman of PDP from the party by five members in his ward in Andoni Local Government Area of Rivers State.

Lawyer to Prince Secondus, Georfery Uwalaka shortly after the court proceedings made some reservations about the proceedings and informed newsmen that he will appeal the judgment.

“If you ask me whether I am surprised with the outcome of the ruling, I will tell you that I am not surprised, I was not expecting less than what I heard in the court today,” Uwalaka noted.

“I am a bit surprised that the ruling went on because there is a pending appeal, which we have filed and record has been entered which we brought to the notice of the court.

“And I expected that the court ought to have stayed further proceedings pending the hearing and determination of that appeal but the court went further to deliver the ruling.” Uwalaka lamented.

Justice Okugbelem Gbasam delivered the judgment after Ibeawuchi Ernest and four orders dragged Secondus to the court to stop functioning as National Chairman since his ward has suspended him for alleged anti-party activities.

The judge before delivering judgment on the substantive matter also ruled on four pending applications in the court.

Justice Okugbelem in his judgment granted all the reliefs sought by Mr. Ernest and four others which bothered on restraining Prince Secondus from calling for any ward, local government or state congress or setting up committees for such congresses or participating in any activity of PDP.

But Secondus’ lawyer insisted that “the good news is that we have the right of appeal and I have my client’s instruction to do so.”

On his part, lawyer to the PDP, Eugene Odey also spoke on the judgment involving two of his clients.

“The only thing that touches us is that the constitution of the party has been thrown up for judicial interpretation and it is on that regard that we feel that we have to react,” Odey said.

“We felt that we ought to have been given the opportunity to state our position regarding the constitution of the party.

Lawyer to the four PDP members that dragged Secondus to court, Nwosuegbe Eze, expressed satisfaction on the judgment. He insisted that “Uche Secondus has been suspended and remained suspended as the party chairman.”

“He cannot perform any other duty associated with the office of the chairman. Members of PDP of Rivers states were not satisfied with the way the chairman was handling the affairs of PDP at the national because there were a lot of internal wrangling, divisions, people were leaving the party and felt that his actions or him remaining as the chairman has caused great harm,” Eze noted.

The lawyer added that “instead of helping the party,” the embattled National Chairman “has caused great havoc to the party.”

“That’s why they took this action and the court confirmed it,” he reiterated.