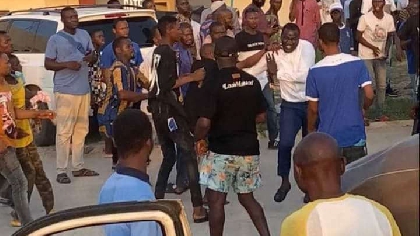 After his near-death experience in Ibadan this week, a sports journalist plans to donate the compensation awarded to him to orphanages and insists stadium violence in Nigeria must stop

The Nigerian sports journalist, Tobi Adepoju who was assaulted early this week after a Nigerian Professional Football League (NPFL) match has promised to donate the compensation given to him by the League Management Company (LMC) to orphanages.

Oganlamedia, as Tobi is popularly called made this known in a statement seen by Nigeria Info.

On Wednesday, Adepoju was assaulted by some fans at the stadium in Ibadan after an NPFL game between 3SC and Remo Stars which ended 1-1.

According to an eye witness, fellow journalist, Atinuke Esan, who was also a victim, and spoke to Femi and the Gang on Nigeria Info’s Game On show on Thursday night, said Adepoju, herself and another journalist simply identified as AY, were pitch side after the game when the attack started.

“The 3SC Management officials were there and didn’t do anything,” Esan said.

“One of the attackers wanted to assault me too before another told him to leave me alone because of my gender,” she added.

I watched the video of Tobi’s attack yesterday and I can’t deal.

Tobi was subsequently assaulted till he ran out of the stadium to meet a group of policemen who were stationed outside the stadium.

The security personnel ended up saving him by shooting in the air to disperse the mob, a video of which has since gone viral.

Outside the stadium at Lekan Salami stadium after Remo Stars drew Shooting Stars 1-1.

The stadium should be banned, 3 points deducted from Shooting Stars & banished to Kaduna. pic.twitter.com/KptrteVAzJ

The Media Officer of Shooting Stars, Tosin Omojala, in an attempt to defend the incident on Thursday morning ended up noting in a radio interview that if Adeoju had been killed, “nothing would have happened,” a comment which generated lots of reactions.

The MO also appointed accusing fingers on the @LMCNPFL and said 3SC has no problem in terms of match violence.

However, the management of 3SC put out a statement condemning both the incident and the utterances of its official but it was not enough to stop the obvious punishment.

On Friday, the LMC came down hard on both clubs expelling 3SC’s Media Officer, Omojola and Kits Manager, Mr Majolagbe Kolawale “from all NPFL relayed activities for a minimum of 12 months.”

It's easy to talk, they planned to kill me. They told them, I have been beaten and rushed to the hospital and they started rejoicing, they were shocked to see me in good condition after. They have been sending me threats, I thought it was all jokes. I wish such experience in life https://t.co/zvnAL7Wxij

Also, a compensation of five hundred thousand naira was awarded to the assaulted journalist for “lost valuables and medicals” while the 3SC stadium was “closed to fans for the remaining fixtures of the season.”

But Adepoju insists that the verdict is not about him.

“I have seen the verdict and I appreciate the LMC for protecting the media, this is not about me, but we must end media brutality in our football.

“I have spoken with my family, and we have decided to donate the N500, 000 to the orphanage and also to support my younger colleagues.

“I will visit orphanage houses in Ibadan and Lagos (Alagbole community will be a priority) to make donations.

“I will sponsor two younger colleagues willing to take the Basic Journalism course at the National Broadcast Academy in Ikeja, Lagos,” Adepoju added.

“I appreciate my colleagues for their support, they stood for me and sought for justice. I am grateful for your love and kindness. I can’t stop appreciating my colleagues. I love you all.

“I appreciate my friends and social media family, the support was overwhelming. My little contribution to Nigerian Football and NPFL was appreciated.

“Special appreciation to Mr. Olami (@OlamiUthman); he is the hero of this struggle. The video he recorded exposed the terrible incident.”

Sadly, violence at stadia has become a recurrent decimal across the country despite the punishments meted out to defaulting individuals and clubs.