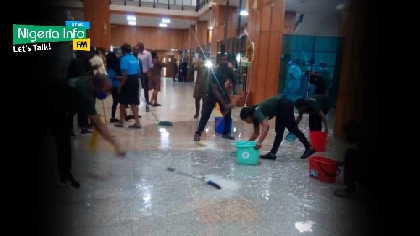 Senate President Ahmad Lawan said the roof leak is proof that the complex is overdue for rehabilitation.

Activities at the Senate Hallowed Chamber on Tuesday morning were disrupted following the heavy leaking of the roof.

Water dripped from the roof of the building shortly before the plenary resumed on Tuesday.

National Assembly staff were seen scooping water that flooded the lobby of the building with buckets and Packers.

Recall that President Muhammadu Buhari had in 2019 approved about 37 billion naira for the renovation of the National Assembly building complex.

Do you agree with the Senate President?

Senate President Ahmad Lawan said the roof leak that occurred at the National Assembly Complex on Tuesday is proof that the complex is overdue for rehabilitation.

Lawan said Nigerians should have supported the renovation effort because the complex has not been upgraded in over 20 years.

He said the complex is a symbol of democracy that must be protected adding that "If this complex leaks, the interpretation is we're not holding our democracy with the respect it deserves.