'I BEG TO DIFFER' Debate Tournament Enters Quarterfinal Round 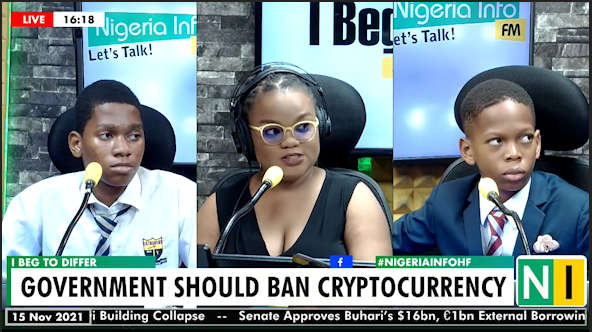 The quarterfinals of the 'I BEG TO DIFFER' debate tournament kicked off with 11-year-old Timothy Ebuka Ebule and 15-year-old Uchechukwu Golden going head-to-head for a chance to reach the semi-finals.

The first quarterfinal session saw contestants speak on the topic, "Should the government ban Cryptocurrency?"

15-year-old Uchechukwu Golden, who supported the motion, argued that cryptocurrency enables fraud as governments cannot verify transactions made on the blockchain.

On his part, 11-year-old Timothy Ebuka Ebule, who opposed the motion, argued that the speed of cryptocurrency transactions eliminates the number of hours spent on queues at the banks.

The judges, having weighed both arguments and articulation of the contestants, ruled in favour of Uchechukwu Golden.

The 'I BEG TO DIFFER' quarterfinals continues this Tuesday on Nigeria Info's Hard Facts with host, Sandra Ezekwesili.