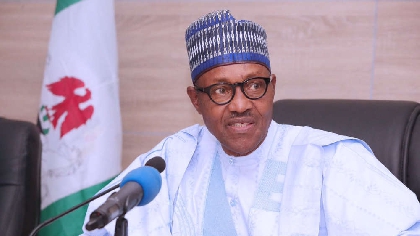 President Muhammadu Buhari says he is shocked by the news that a Nigerian Air Force Jet was attacked by bandits.

The President revealed this in a statement by his special assistant on media and publicity, Garba Shehu after receiving a security briefing about the NAF Alpha jet which crashed in Zamfara State last weekend.

Buhari went on to applaud the bravery of the jet pilot who in the discharge of his duties handled the situation very well.

The statement in part read, “President Muhammadu Buhari has commended the gallant pilot of the Nigerian Air Force Alpha Jet, Flight Lieutenant Abayomi Dairo, who successfully ejected from an aircraft that came under intense ground fire from bandits in Zamfara State, Northwest, at the weekend.

“I was shocked by the devastating news of the air crash but felt much relieved, following the successful ejection by the pilot and his eventual rescue. May the injured pilot recover at the earliest time.,’ the President was quoted to have said.

Recall that the Airforce in a statement on Monday confirmed that their aircraft came under fire from bandits but there were no human casualties as the pilot ejected and escaped to safety.