I Won't Apologize For Who I Am - Rashford 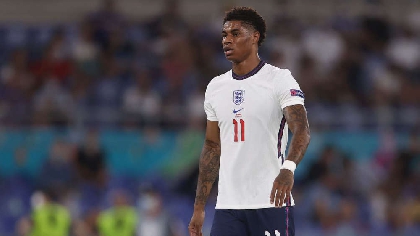 England forward Marcus Rashford may have apologized for missing his penalty during England's loss to Italy on Sunday, but the Manchester United player "will never apologise for who I am."

The 23-year-old, alongside Jadon Sancho and Bukayo Saka were all subjected to online racist abuse after the game after all three missed their spot kicks during the shootout.

In a statement, Rashford said, "I've felt no prouder moment than wearing those three lions on my chest and seeing my family cheer me on in a crowd of 10s of thousands."

"I can take critique of my performance all day long, my penalty was not good enough, it should have gone in but I will never apologise for who I am and where I came from."

Following the abuse, the Metropolitan Police had on Monday said it is investigating the abuse and said "it will not be tolerated."

While Prime Minister Boris Johnson as well as the Football Association condemned the act, England manager Gareth Southgate described the abuse as "unforgivable."

England lost 3-2 on penalties to Italy after a 1-1 draw after extra time.