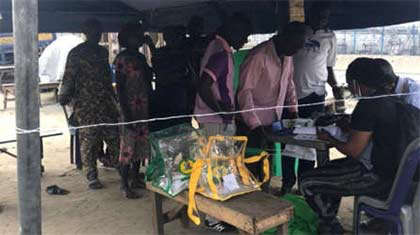 As the Lagos State Local Government Elections gets underway today, residents are expected to turn out en masse in 13,323 polling units across 57 local councils in the state.

However, reports trickling in from NigeriaInfo correspondents across several polling units indicate a mixture of 'no activity' to 'little activity' in polling units.

In the early hours of Saturday, reports indicate that officials of Lagos State Independent Electoral Commission (LASIEC) are only just arriving with voting materials to commence voter accreditation in wards such as: Sanusi ward 054, Itire /Ikate LCDA, Ward Maidan/Agiliti PU 013, PU 004 ward A Ebute Ikorodu , Savage ward , Coker Aguda LCDA, 002 and many others.

Party agents in PU 21, Bawala, Opposite the Bariga LCDA are reported to be verifying ballot papers before voting begins at the unit.

INEC presiding officers who spoke to Nigeria Info correspondents reveal that voting will commence as soon as accreditation is carried out.

It is important however to note that going by reports from NigeriaInfo correspondents at several polling units, the level of voter turnout is quite low.

More updates as they come in...