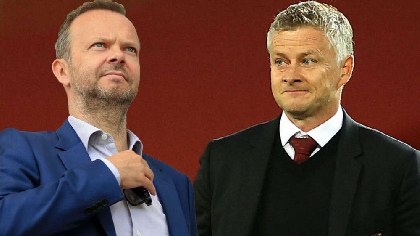 Solskjaer has signed a new deal with the Old Trafford club

Woodward was speaking to the media after the 48-year-old manager signed a new deal with the Old Trafford club.

Solskjaer who first joined the club as an interim manager in 2019, replacing the sacked Jose Mourinho, has signed a deal until 2024 with an option for a further year. He was appointed on a permanent basis in March of the same year.

He guided the Red Devils to the Europa League final last season where they lost on penalties to Villareal.

"Ole and his staff have worked tirelessly putting the foundations in place for long-term success on the pitch," said Woodward.

He added, "We are more confident than ever that, under Ole's leadership, we are heading in the right direction."

"The results of that have become increasingly visible over the past two seasons and we are all looking forward to seeing this exciting team develop further in the years ahead.

"What is especially pleasing is the way this progress has been achieved with a blend of young, homegrown talent and top-class recruits, playing attacking football in the best traditions of Manchester United."

Also speaking to the press after signing the dotted lines, Solskjaer who spent 11 seasons at Old Trafford as a player said he was "delighted."

"It is an exciting time for Manchester United. We have built a squad with a good balance of youth and experienced players that are hungry for success.

"Everyone knows the feeling I have for this club, I have a fantastic coaching team around me and we are all ready to take that next step on our journey."

Solskjaer's new contract comes a day after the club announced the signing of England International Jason Sancho from Borussia Dortmund for a reported fee of £73m.