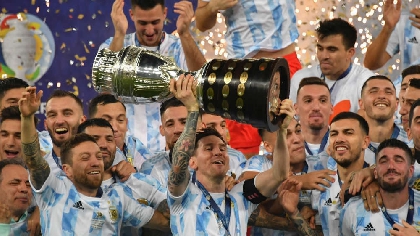 Messi was named Player of the Tournament after victory over Brazil

Having experienced twenty-eight years of the Copa America title drought, the Lionel Messi led Argentines finally won the Copa America after defeating Brazil in the final played at the Maracana stadium.

The 34-year-old who was named player of the tournament, also ensured he ended his wait for a major title with the Albiceleste in his 10th major tournament.

Angel Di Maria's finish on 22minutes from a Rodrigo de Paul pass was enough to ensure a 1-0 win over their arch-rivals.

Messi first represented Argentina at a major tournament 15 years ago, he has been to four World Cups and six Copa Americas since then, raking in 53 appearances at those competitions.

After losing back-to-back Copa America finals in 2015 and 2016, which came two years after also losing the World Cup final to Germany, Messi had retired from international football, he however reversed that decision, leading Argentina to the 2018 World Cup.