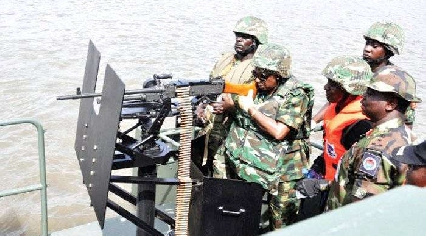 The Director, Defence Media Operations, Maj.-Gen. Musa Danmadami made this known at a bi-weekly news briefing of the Defence Headquarters on Thursday in Abuja.

Danmadami said the troops, in the conduct of operations, Octopus Grip and Operation Dakar Da Barawo, made the arrest during operational activities in creeks, villages, communities and towns.

According to him, troops also recovered four tankers, two-speed boats, one generator, one outboard engine, 14 pumping machines and three AK47 rifles during the operations.

“Troops also arrested 21 pipeline vandals while all recovered items and apprehended oil thieves were handed over to the appropriate authorities for further action.

In the South East, Danmadami said, the military and other security agencies had sustained an onslaught against the Proscribe Indigenous People of Biafra (IBOP) to restore normalcy to the region.

In South West, he said, the troops of Operation ATWASE had continued to clamp down on smugglers of contraband in the border areas, bushes and watersides in Ogun and Kwara States.

“Items recovered during the operations include 1,542 jerrycans of Premium Motor Spirit, 311 bags of 50kg foreign rice and a truck loaded with substances suspected to be Cannabis Sativa.

“All recovered items were handed over to Nigeria Customs Service in Ogun and Kwara State, for further necessary action,’’ he added.