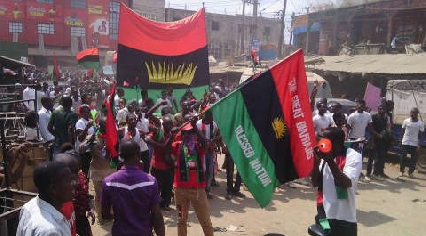 Two people were allegedly shot dead on Monday during a bloody confrontation at Izuchukwu Junction of the industrial town of Nnewi, Anambra State.

According to an eyewitness who spoke to Nigeria Info one of the victims was a leader of Eastern Security Network (ESN) and the other, a commercial motorcyclist.
The source claimed that problem started at about 7.00am in the morning when some Indigenous People of Biafra (IPOB) members came out to enforce the sit at home order and in the process, blocked the major roads in the industrial town.
Some unidentified soldiers, reportedly came to clear the blockade, leading to an altercation between them and the IPOB members which lead to the two victims allegedly killed by gun shots by the unknown soldiers.

The Police Public Relations Officer (PPRO) for Anambra State command could not be reached for confirmation as at the time of filing this report.
Meanwhile, the sit-at-home order by IPOB to residents of the South East grounded activities in almost all parts of Anambra State with Onitsha, the commercial nerve centre of the state, being the worst hit.
In Lagos, the opposite was the case as most traders at the popular Ladipo Market, Mushin as well as the Balogun, GL and Mandilas at the Trade Fair Complex, Lagos-Badagry Expressway, were all out for business.
Some of the traders who spoke to our correspondents were oblivious of the Sit-At-Home order but insisted that the order would work perfectly in the South East.

In Port Harcourt, the popularly spare parts market, Ikoku, has been demolished by the state government. Traders who do business in what is left of the market came out very early to do business, unlike previous instances when such IPOB orders were carried out to the latter.
In the nation’s capital, Abuja, and the commercial city of Kano, it was business as usual as most traders went about their normal business activities.
Earlier, the Anambra State Government, had advised members of the public to ignore the order by IPOB and to go about their normal legitimate businesses with an assurance that adequate measures had been put in place to protect lives and properties.
However, as early as 6.30 am, the usual busy activities in the town disappeared as markets, shops, banks, fast food centres, popular eatery joints/relaxation and artisans, did not open for business.

While the Onitsha/Owerri road, Upper Iweka, 3-3/Nkwelle road, Awada axis, Inland town, Port-Harcourt roads were all deserted, the remnant portions of the popular Onitsha Main Market, Ogbaru Relief Market, Spare Parts Market, Ogidi and other markets were also not business as usual.
There was heavy presence of armed security personnel, who patrolled the major roads, apparently to prevent possible breakdown of law and order.
There were however, unconfirmed reports of some enforcement arm of the IPOB, harassing persons who defied the order, beating some up and allegedly killing some others.

Ikenna Arinze is a Public Affairs Analyst, who is sympathetic to the IPOB course. He acknowledged that the sit-at-home protest was the people’s way of reacting to the continued detention of Kanu, saying they reserve the right to so do.
“I don’t see anything wrong in the people deciding to stay at home to protest what they perceive as unfair treatment to their leader. Instead of taking up arms, they have taken this measure to register their grievances and government must respect that,” he said.
Arinze however faulted any form of attack on anyone who disobeys the sit-at-home order, alleging that the attacks may have been perpetrated by government forces, to tarnish the image of the group.