We are Not Spewing Fake Statistics and Wrong Figures - Tinubu 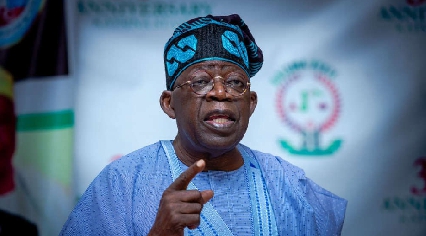 The presidential candidate of the All Progressives Congress (APC), Bola Tinubu, has stated that the party is not threatened by any opposition.

Asiwaju Tinubu said this on Wednesday when he visited the National Working Committee (NWC) of the APC for the first time after the party’s Special National Convention in July where he emerged as its presidential candidate.

He was confident that the ruling party was well positioned for victory in the 2023 General Election.

“We are not threatened. We are confident, and we are very, very proud of ourselves. We are orderly and committed to democratic principles and values,” he told journalists after the meeting.

“We are not bickering. Can you say that of other parties?

“We are not spewing out fake statistics and wrong figures. Can you say that of any other parties? We are what we are: a progressive party.”

The former governor of Lagos State also denied reports of a plan to make the National Chairman of the APC, Senator Abdullahi Adamu, lose his job before the general election.

He said the meeting with the NWC was to structure the party’s campaign, which would start later in September.

“The purpose of this meeting is to consult further the organizational structure of the campaign for us to harmonise plans.”

He was at the party secretariat in the company of his running mate, Senator Kashim Shettima; the Speaker of the House of Representatives, Femi Gbajabiamila; the Plateau State governor, Simon Lalong; and that of Ebonyi State, Dave Umahi.