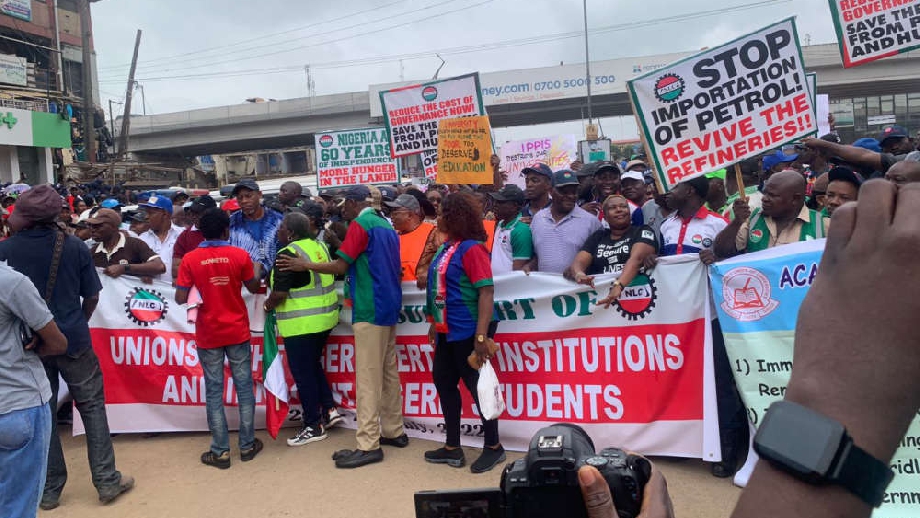 The protesters echoed “Buhari must go” after they were addressed Monday by the fiery lawyer Femi Falana in Ikeja, Lagos.

The Senior Advocate of Nigeria (SAN) said the country was facing untold terrorism and economic hardship.

“But President Buhari is junketing all over the world,” he continued.

“He has already told Nigeria that he’s tired and is anxious to go home. We are therefore saying today that Buhari must go.”

The hundreds of workers who gathered for the first day of the demonstration shouted “Buhari must go.”

“What are we saying?” Mr. Falana asked

“Buhari must go,” the workers repeated.

“We’re tired, we’re frustrated, we’re disenchanted, we’re embarrassed as a people and I join our comrades in saying that ‘enough is enough.’

“Don’t let them deceive you by saying there’s no money in our country. It is a lie.

“Please note this: in this year’s budget, the regime claimed that it was going to spend N443 billion on oil subsidy; later the regime went to the National Assembly and claimed it is going to be N4 trillion.

“The latest now is that the regime is saying it is going to be N6.5 trillion, yet there’s no money for education but there’s money to pay smugglers whom they claim are smuggling fuel out of Nigeria.”

The lawyer also said that the demonstrations slated for Tuesday and Wednesday were a warning protest.

He said the EndSARS protest would be “child’s play” when Nigerians “come on fully.”

The Nigeria Labour Congress is protesting across the country over the federal government’s failure to meet the demands of the Academic Staff Union of Universities (ASUU).

ASUU embarked on a strike on 14 February to force the government to improve university infrastructure, pay lecturers' salaries through the University Transparency and Accountability Solution (UTAS), and pay some lecturers’ arrears.

The union accuses the federal government of insincerity in the talks both teams have been holding.