How Flood Killed Three in Abuja 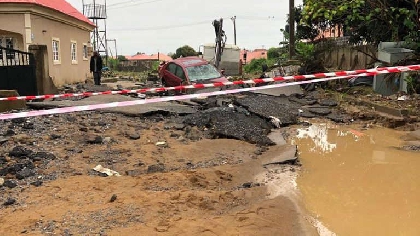 Buildings were submerged, cars swept away and several fence and walls were pulled down by the floodwaters.

FEMA Director-General, Abbas Idris told our correspondent that the unfortunate incident occurred as a result of a heavy downpour, adding that the agency had deployed all available resources to the scene of the incident.

He said FEMA was working will relevant agencies in not only addressing the issue but forestalling future occurrences.

This is the second such flood incident in the area. Last year, a similar incident claimed one life.

The flooding is said to result from the indiscriminate erection of buildings, especially on flood plains, poor flood control systems and blocked drainages.