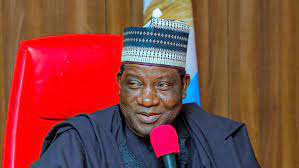 Plateau State Governor, Simon Lalong says perpetrators of recent killings and all security breaches in the state will be fished out and prosecuted.

He made the vow at the Presidential Villa, Abuja on Tuesday after a meeting with President Muhammadu Buhari to brief him on the unfortunate murder of travellers in the state.

Governor Lalong, who deeply regrets the incident, said the greater commitment was being elicited from Plateau communities to end all violence.

While adding that calm has fully returned to the state, Governor Lalong said the curfew imposed on troubled localities would soon be fully relaxed.

“What we are doing is to ensure that there is proper investigation and prosecution. You know, both the soldiers and police are controlled by the Presidency and right now they are diligently working in my state on a daily basis.

“That is why on the first day, I announced a 24-hour curfew but I kept on relaxing it. By the grace of even this week, the curfew would further be relaxed, so that people can carry out their normal activities.

“We are the only state that has a peacebuilding agency set up by the state government and it is the only State that for now has established an interreligious council. These are all the efforts that we have done and within a short time, peace has returned to Plateau State.”

The Plateau governor also revealed some of the requests he made to President Buhari.

“I also made a request to the President about relief materials and also still re-echoed the issue of resettlement of Internally Displaced Persons (IDPs). We have a lot of IDPs in my state, we have a lot on our hands already and when such happens, you expect the state to seek for support for relief materials.

“We are doing our best but the President said he will talk to the Minister of Humanitarian Affairs so that attention would be given to those who are displaced as a result of this crisis.

“Again, I want to appeal to people because most of those who are outside the state calling for reprisal are not people from Plateau State. I am yet to see one cleric coming out to say I want reprisal. I have set up an interreligious committee, which comprises all top religious leaders in Plateau State, both Muslims and Christians and when things like this happen, they address it.

“So for people to call from outside the state for reprisal, I say no because they are crying more than the bereaved; leave us. We are handling our issue, we are doing reconciliation and consultations don’t call for reprisal attacks. If you want to do a reprisal, you are on your own. We have agreed with the religious leaders and all of them are doing their best, they are cooperating with the State and we are also doing our best,” Gov. Lalong added.

“When this happened, we had to go to Ondo but in so many places that is unusual, but we took all of them that we rescued and treated and went there with a powerful team led by the Deputy Governor of Plateau State with all religious leaders to Ondo to sympathize with the state. Their Governor also said they will also send a team to come and appreciate what we have done.

“The remaining things we need to do are to continue with reconciliation and dialogue. We are the only state that has a peacebuilding agency set up by the State government and it is the only State that for now has established an interreligious committee. These are the things we did for peace to return within a short period of time but that does not mean that we are sleeping on fishing out the perpetrators of these criminal acts,” he said.

“For over six years now, we have been enjoying peace in Plateau State so, anybody that wants to take Plateau back to those old days of crisis, it is not only me as Governor but all Plateau people will resist that. They have said ‘we don’t want to go back to crisis again, we are enjoying peace and we want to continue to enjoy our peace.’” the Plateau State Governor added.

On the security situation at the University of Jos, the Plateau State governor said there was no need for the evacuation of students by some state governors as the institution’s management has requested the students to return for lectures.