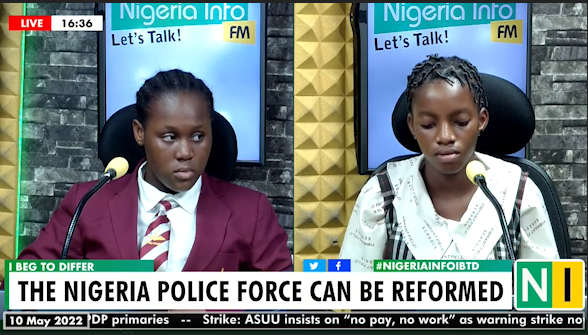 Kolade Stephen, who opposed the motion, emerged as the winner of the day’s first debate session, progressing to the next round of the tournament.

In the second debate session, 15-year-old Ekemini Awesome of Inspira College, Ikorodu, and 15-year-old Precious Chinenye Anyaeji of Vibrant Field College, Ajangbadi faced off on the topic, 'The Nigeria Police Force Can Be Reformed.'

Ekemini Awesome, who supported the motion, insisted a vast majority of the ammunition and equipment used by police officers are outdated and reform is needed to rebrand the force to current day standards.

She added that the #EndSARS protest highlighted a clear reason why the police force needs to be reformed immediately.

Her opponent, Precious Chinenye, thought that the "rot in the police force is beyond reformation."

After consideration by the panel of judges, Ekemini Awesome emerged as the winner of the second debate session, progressing to the quarterfinal round of the tournament.