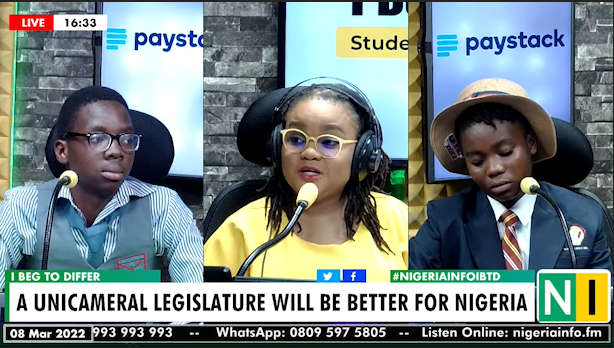 Ihuoma Osunkwo, who supported the motion, emerged as the winner of the day’s first debate session, thus progressing to the next round of the tournament.

The second debate session paved way for 15-year-old Victor Olusegun, and 14-year-old Andrella Nnadi to slug it out on the topic: ‘Unicameral Legislature Will Be Better For Nigeria.’

Andrella Nnadi, who supported the motion, insists that the money spent on a Bi-cameral Legislature is extremely outrageous.

She added that a bicameral legislature will simply lead to repetition of duties in the legislative arm of government.

Her opponent, Victor Olusegun, was of the opinion that a bicameral legislature will help adequately maintain checks and balances within the government.

Andrella Nnadi, after consideration from the panel of judges, emerged as the winner of the second debate session, thus progressing to the next round of the tournament.