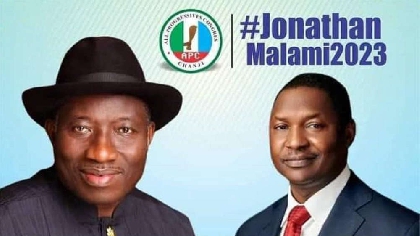 ...Stories are rumours and distractions -Malami

The Minister of Justice and Attorney-General of the Federation, Abubakar Malami, has said it's untrue that he is included on a joint Presidential ticket with former President, Dr. Good luck Jonathan.

Malami made this denial through a statement made by his media aide, Dr. Bashir Gwandu.

The statement said such stories are rumors and a distraction invented by an individual.

Gwandu added that there have never been such discussions with the AGF as he hasn’t shown interest in any political post.

“2023 is still very far to even talk about it. The attorney has never indicated interest to stand for election with anybody,” he said.

He advised members of the public to be wary of what they say or post on social media or anywhere.

“What the minister needs now is to focus more on how to deliver the much-needed services to the country and that is what he has been doing and will continue to do,” he added.

He explained that people should not force words into the mouth of the AGF and to, henceforth, stop peddling such unfounded rumors that have no basis whatsoever.