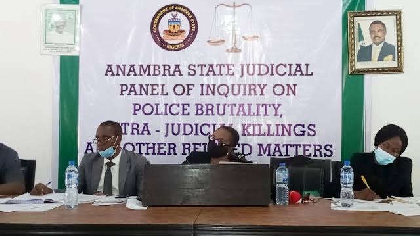 Almost ten months since the Anambra Panel on Extrajudicial Killings and Abuse by the defunct Special Anti-Robbery Squad (SARS) was inaugurated, nothing appears to have been achieved with the panel, as there are no records of any form of compensation for victims who filed petitions at the panel.

Nigeria Info investigated the development and found out that some members of the panel had resigned their membership because they believe the state government is not serious about the issue.

On the 14th of October, 2020, Governor Willie Obiano had addressed END SARS protesters in front of the state government house in Awka and afterwards, promised that his government had earmarked N200 million, as compensation for victims.

However, almost ten months after, it appears nothing has been done.

According to the Publicity Secretary of the All Progressives Congress, in Anambra State, Okelo Madukaife, Governor Obiano should update the state he supposedly governs on the extent of work done so far by the panel on abuse of human rights by the defunct, SARS.

He regretted that while the whole nation is conversant with the proceedings and actions arising from similar panels in other states, Anambra has continued to be shrouded in secrecy and uncertainty.

“We urge Governor Obiano to address this all-important issue of Anambra State being the most abused under the defunct SARS and yet its panel is literarily operating under the table,” he said.

For one of the members of the panel who resigned, Chijioke Ifediorah, the persons who quit did so in February 2021 because they suspected that the governor was only paying lip service to the genuine agitations of the people.

“The governor was not serious with the panel. It was seriously underfunded. The panel even suspended sitting sometime in November due to logistics issues. At some point, we did not hear anything about the whole process. A lot of issues were expected to be tackled but nothing happened.

“We suspected that the governor wanted this to be like any other white elephant project so that was why we resigned our position in the panel and caught the attention of the government who reached out to us to continue participating. By then, we have lost every zeal to continue,” he regretted.

Ifediorah also regretted that despite their letter to the governor asking him to fulfill his promise to compensate victims, it appears nothing has been done.

He expressed disappointment that despite the open announcement by the governor before everyone at the protest of 14th of October, 2022, in front of Anambra State Government House, that he had about earmarking  N200 million for victims of police brutality, nothing was done.

“Anambra had the highest record of petitions across the country as a result of persistent unchecked police brutality.

“We believe it is our responsibility to ensure that government fulfills its responsibility to the people but unfortunately, all our mails to the governor on the matter, had gone unreplied and we have not heard that any compensation has been made to anyone,” he disclosed.