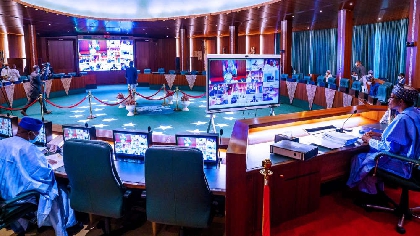 The Federal Executive Council (FEC) has approved a Draft National Policy on Internally Displaced Persons, IDPS.   The Policy provides a platform for actors in the humanitarian and development space to help achieve the set goal.

Announcing this after Wednesday’s FEC meeting, the Minister of Humanitarian Affairs, Disaster Management and Social Development, Sadiya Umar Farouq, added that the overall goal of the policy is to strengthen the institutional mechanisms for attaining the rights, dignity and wellbeing of vulnerable populations.

“Today is a great day for the ministry as well as for the government. This administration has reached another milestone for the purpose of these internally displaced persons,” the elated minister said.

“The national policy on internal displacements provides a platform for all relevant actors in humanitarian and development space to key in and contribute towards a common goal.

“And the overall goal of the policy is to strengthen institutional mechanism and frameworks for the realisation of rights, dignity and wellbeing of vulnerable populations through mitigation of impact and achievement of durable solutions to internal displacement in Nigeria.

“And with the approval of this policy, a multi-sectoral structure will fully emerge, which will ensure a coordinated operational and strategic response to all the humanitarian challenges our nation is facing, providing practical and actionable solutions that will resolve internal displacement in the country,” Umar Farouq said.

She added that about two to three billion naira has been spent on several mediation programmes for IDPs in the frontline states.

‘’The mandate of the ministry is to formulate and develop humanitarian interventions and show strategic disaster mitigation preparedness and response and also to develop and formulate policies geared towards social inclusion and protection programmes in the country.

“So you can see it's quite much and this money runs into millions or billions of Naira within the budgetary provision given to the ministry’’.

The Minister also spoke on the figures spent on emergencies adding that Nigeria has “2.3 million persons displaced in the country’’

“This year on the emergency responses, we have spent billions maybe two to three billion because of this emergency issues of flooding, emergency interventions.

“But as I said, for the funding of all these interventions it's within the budgetary allocations, it’s public knowledge.

Also at the FEC, Minister of Works and Housing, Babatunde Fashola said Council approved the completion of the dualization of the Odukpani-Itu-Ikot Ekpene road.

The road construction is expected to be done at a cost of over 79billion naira with a 16months timeline.

Answering a question on the failed portion of the Lokoja-Kabba Highway, Fashola blamed the incident on natural causes, which are usually prevalent during the rainy season.

He however said that the Federal Road Maintenance Agency, FERMA was mobilizing to the site to fix the challenge.

The Minister regretted that the federal budget is devoid of a percentage provision in the Works Ministry to execute remedial and emergency interventions.

“As we go through the rainy season, this is the context in which to locate the Lokoja-Kabba. It's a failure caused by nature and ageing. And, again, an opportunity to share with you what we have. We expect that these things will happen, but we don't know where it will happen every time.”

“So we've been proposing that Nigeria should have an emergency provision in the works budget, but we haven't been successful enough. There must be a contingency, a sizable sum, because when we see failures, last year, we had a problem like that in Kebbi, where roads were washed away.  We couldn't respond because we didn't have the resources. But we will lean on FERMA.

“Well, traditionally back in Lagos when I was governor, I think we used to provide about five 5% of our capital expenditure as a contingency fund for emergencies. Something between three and 5% varies across the world.”

Earlier, Nigeria Info reported that the Federal Road Safety Corps alerted the motoring public that a section of the Lokoja-Kabba Highway had caved in between Zariagi and Obajana cement factory

The FRSC Public Education Officer Bisi Kazeem, who disclosed this on Tuesday, said the development has led to an obstruction of the free flow of traffic.

He advised motorists to find alternative routes such as the Lokoja-Okene-Kabba, or Lokoja-Okene-Ogorimangogo just as he solicited for maximum cooperation from road users.