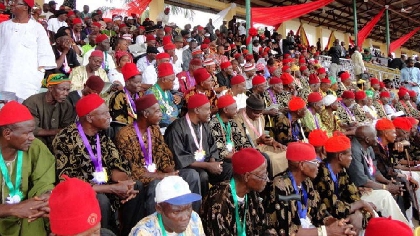 The apex socio-cultural organisation in Igbo, the Ohanaeze Ndigbo Worldwide, has said Nigeria having a President of Igbo extraction come 2023, would address current spates of insurgency and banditry in the North.

The factional Secretary-General of Ohanaeze, Chief Isiguzoro Okechukwu said this in a statement on Wednesday, July 14, 2021.

The statement also noted that a president of Igbo extraction would take over 10 million children off the streets in the North.

The organisation also said only a disciplined personality with Igbo entrepreneurial bravery and heroism can restore normalcy in the region.

The statement reads in part; “Ohanaeze Ndigbo Worldwide pledges to Northern Elders and Youths that the Northern Territory of the country will experience a peaceful atmosphere and robust economic development if Igbo succeeds President Muhammadu Buhari in 2023.

“We understand why Northern Elders Forum and Arewa Consultative Forum, focus on getting assurances from the South, of what the North stands to gain if they are allowed to succeed Buhari in 2023.

“It’s obvious that the government’s incapacity to get lasting remedies for the insurgency and banditry in the North is giving northern leadership sleepless nights; but the with Igbo investments worth N22trillion and out of school northern children rising to 19 million from 19 the Northern States, it’s only a disciplined personality with Igbo entrepreneurial bravery and heroism can restore normalcy in the North.

“Arewa Youths do not seem to have a clearer picture of the dwindling fortunes of the North. With reported news of Borno state having two Governors, one led by APC controlled-25 LGAs and ISWAP controlled-5 LGAs, there are fears of ISWAP taking over the entire North”.