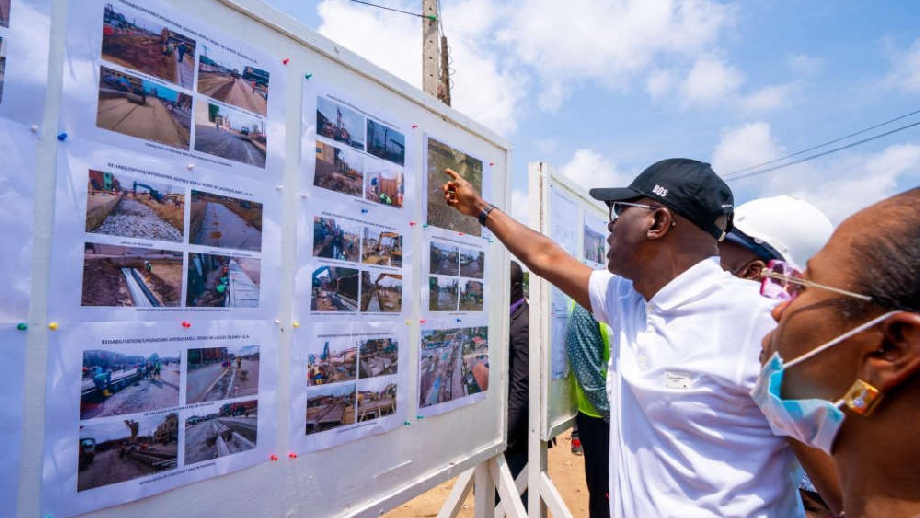 On Wednesday, Lagos State Governor, Babajide Sanwo-Olu said flooding in Lagos Island would soon be permanently resolved, with the ongoing construction of a drainage system at the Ilubirin area of the state.

Governor Sanwo-Olu said this during an inspection tour of some projects on the Island.

They include the Cappa/Okepopo Adeniji-Adele Road, the New Massey Children's Hospital, the renovation of General Hospital, Odan, and the laying of three high-capacity pumps at the Ilubirin drainage site.

In the company of other Exco members, Gov. Sanwo-Olu toured for four hours and acknowledged that the contractors were working on schedule.

The Governor said the renovations at the General Hospital, Odan which is the oldest in the state, were being done in phases, adding that the hospital would accommodate more patients when completed.

He also explained that doctors’ quarters would be built in the other general hospitals in the state, as is available at the General Hospital, Odan.

“We started the journey, the on-the-spot assessment of the reconstruction of Cappa/Okepopo & Adeniji-Adele Road in Lagos Island.

“The contractor said the project is about 60-65 percent. They are on track to see if they can complete the project before the end of the year.

"Thereafter, we went to the New Messey Children's Hospital construction where we noticed the two buildings that are meant to be coming up.

“A nine-storey car park has started. In the 10-storey main hospital for the children, pipes have been completed.

“They have assured us to keep up with the terms of the project.

"Thereafter, we crossed to Ilubirin pumping site. It is the ministry of drainage project where we have current temporary walls, pumping is going on.

“It is to prevent water from Lagos Island. That is why you saw those pumping stations there.

“If they don't do that barricading, water will naturally be flowing back from the lagoon.

“Since Lagos is below sea level when the water rises from the lagoon, it can flow back from the city," he said.

The Governor added, "The main observation today is we are constructing a new 1km or 1.2km diversion from the front of Ilubirin Housing Estate that will take the body of water onto the Lagos lagoon. Three high-capacity pumps I'm told will be arriving next month.

"What that means is that the issues around flooding around Lagos Island can be completely resolved.

“Once that has been done properly, we can go back to Lagos Island and address the collectors like Odogiwa and others.

"Finally, we are here at the Lagos Island General Hospital, Odan which is the foremost general hospital in the state.

“It is a secondary health facility. The hospital is as old as the state itself. And also after LASUTH, it has the largest number of patients coming on.

"We can see in the last three years we have been doing different phases of extensive renovations because the hospital in itself cannot be closed down.

“The second phase is the pharmacy, catering, and some other parts.

“The third phase is the eye clinic, admin, the ambulance bay, the patient's waiting area, the children's ward, and surgical for males and females.

“In the fourth phase, there will be new demolition to have additional patients, the doctors’ quarters.

"Just to mention that the new hospitals we are building, we are trying to infuse the doctors' quarters, the one at Gbagada to give residence to doctors and other medical practitioners. We also have another one at Ojo."