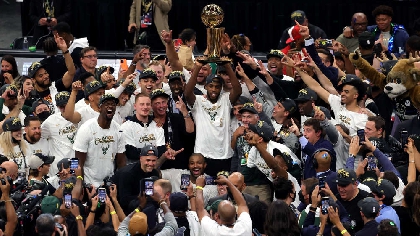 The Bucks' 4-2 series win was their first title victory in 50years.

The Milwaukee Bucks defeated the Phoenix Suns 105-98 in game six of their finals playoff to win the NBA title.

The 4-2 series win was their first title victory in 50years.

Star player Giannis Antetokounmpo scored 50 points in front of 17000 fans to make them only but the fifth team to win the best-of-seven finals series after losing their first two matches.

The Suns who were seeking a first NBA crown in their 53-year history, had also lost NBA Finals series in 1976 and 1993.

Speaking after the game, Giannis said, "I'm happy I was able to do it with this team for Milwaukee."

While speaking about his Greek forward, title-winning coach Mike Budenholzer said, "I've learned so much from him. He's a special leader."

Antetokounmpo has now matched the feat of Michael Jordan and Hakeem Olajuwon by collecting a regular season MVP, NBA Finals MVP and NBA defensive player of the year awards.