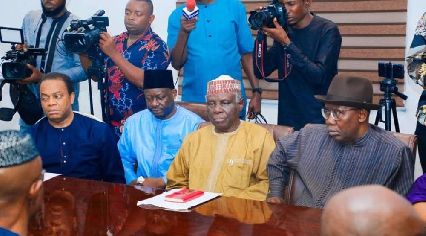 The faction of the Peoples Democratic Party, PDP led by the Rivers State Governor, Nyesom Wike has "resolved not to participate in the" Atiku "campaign council in whatever capacity until the resignation of Dr Iyorchia Ayu."

The resolution followed an overnight meeting of the group at the private residence of the Rivers governor which lasted from about 7pm on Tuesday to about 2am on Wednesday.

“The published presidential campaign council list translates to putting the cart before the horse, the pertinent issue remains the Ayu leadership.”

“We, therefore, resolve that senator Iyorchia Ayu resigns as the national chairman for an acting chairman of southern Nigeria extraction.

“We resolved not to participate in the campaign council in whatever capacity until the resignation of Dr Iyorchia Ayu.”

Nigeria Info had previously brought you news of the infighting in the PDP over the leadership of the party.

Governor Wike and his camp have consistently sought the resignation of PDP chairman, Iyorchia Ayu for a southerner. This they say will create room for equity within the party.

In a bid to pacify the Wike camp, Senator Walid Jibrin announced his resignation as the Chairman Board of Trustees (BoT).

Jibrin immediately got replaced by former President of the Senate, Adolphus Wabara.

This move however did not end calls for the resignation of Ayu for a southerner.

The resolution by the Wike faction comes days before the start of the 2023 election campaign on September 28.